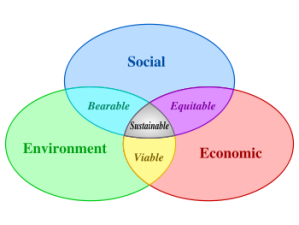 In fact, it was as a result of the Stockholm conference that various countries started appointing an environment minister. In 1976, in Malta, Dom Mintoff appointed Vincent Moran as Minister for Health and the Environment. The emphasis at that stage was environmental health. His primary environmental responsibilities being street cleaning, refuse collection and the management of landfills in addition to minor responsibilities on air quality. The serious stuff came later when Daniel Micallef was appointed Minister for Education and the Environment in 1986.

In 1992, the international community met in Rio de Janeiro to discuss the conflicts between development and the environment. This was brought to the fore by the 1987 UN report of the World Commission on Environment and Development, headed by former Norwegian Prime Minister Gro Harlem Brundtland. The report, entitled Our Common Future, referred to as the Brundtland report, is generally remembered for its definition of sustainable development. Development was defined as sustainable if, in ensuring that the needs of present generations are met, it did not compromise the ability of future generations to meet their own needs.

I think it is essential to focus on the relevance of Agenda 21, which was, way back in 1992, drafted to serve as a global action plan for the 21st century.

Agenda 21 emphasises that sustainable development is not spearheaded by economics. It does not seek to balance profits with other considerations. Based on respect for people and the planet in the carrying out of our activities, it links the environment with social and economic policy.

It is indeed regrettable that some countries, Malta included, loudly proclaim adherence to the objectives of Rio 1992 yet fail miserably in translating them into the requirements of everyday life.

It is necessary to reiterate that Malta, through its present government, has paid lip service to issues of sustainable development. The Environment Protection Act of 2001, now in the process of being superseded, had established a National Commission for Sustainable Development headed by the Prime Minister. This was tasked with the preparation of a National Strategy for Sustainable Development, which was finalised and approved by the commission in December 2006. It was presented to Cabinet, which approved it in the weeks prior to the March 2008 election.

Soon after the 2008 election, during Parliament’s first session on May 10, 2008, Malta’s President proclaimed on behalf of the government that its policies will be underpinned by adherence to the principles of sustainable development. We were then told that when formulating decisions today serious consideration would be given to their impact on the generations of tomorrow.

I doubt whether there was ever any intention to implement such a declaration. I am informed that the National Commission for Sustainable Development, which, in terms of the Environment Protection Act, is still entrusted with the implementation of the National Sustainable Development Strategy, has not met since December 2006. Consequently, the procedures laid down in section 5 of the strategy as a result of which the different ministries had 18 months to prepare and commence the implementation of an action plan based on the strategy in their areas of competence were transformed into a dead letter.

The government has now gone one step further. It is formulating a National Environment Policy. This initiative has been undertaken by the same ministry responsible for issues of sustainable development – the Office of the Prime Minister.

From what is known on the contents of this policy it substantially duplicates the areas addressed by the National Sustainability Strategy. Consequently, it is discharging down the drains four years of discussions with civil society that had given the strategy its shape and content. It is clear that on the issue of sustainable development this government is very rich in rhetoric but when it comes to implementation it gets cold feet. It’s all talk, meetings, documents and consultations. And when a document is finally produced it is back to the drawing board to start the process for another one! This is lip service at its worst.

While the international community meeting in Rio in 2012 will take stock of its modest achievements in implementing the conclusions of Rio 1992 and its follow-up meetings, including those of Johannesburg in 2002, in Malta we are still awaiting a lethargic government to take the first steps.

Other posts on sustainable development during the past 12 months