The term “sustainable development” is one of the most misused and abused in political discourse. I would dare say that it is as misused as much as the word “democracy”. It is generally used in the wrong context, and,  as a result, sends a wrong message.

Sustainable development refers to development which has a long-term view, that is a view that considers and addresses long-term impacts. In particular, it signifies development which ensures that resources are carefully used so that the interests of future generations are taken into consideration. This is not just a matter of environmental concern – it is an intertwining of environmental, economic, social and cultural policy. It means that our actions must take the long-term view and be simultaneously compatible with the forces of nature, the economy, human development and a respect for culture.

Sustainable development is about living in harmony with all that surrounds us, at all times. It is about being in harmony with Mother Earth, with nature and with our fellow human beings. It is treating our surroundings as part of our family. It is the path to dignity, aiming simultaneously at the eradication of poverty and the protection of the planet. Sustainable development requires the synchronisation of cultural, social, environmental and economic policy. Shielding human dignity, appreciating our culture and environmental protection are as essential as economic development.

Sustainable development is, in fact, a balanced approach to development, as its perspective is all-encompassing. It is for this reason that, since the 1990s, when sustainable development first made it into Malta’s statute book, it was retained (on paper) as a direct political responsibility of the Prime Minister. In practice, it involves coordinating all areas of policy and should be reflected in transport policy as much as in maritime or agricultural policy.

Sustainable development permeates all areas of policy and hence requires a senior politician in Cabinet to be in charge. Unfortunately, not even one of our prime ministers assumed direct political responsibility for the matter as, formally or informally, all of them delegated the matter to the Minister (or Parliamentary Secretary) responsible for the environment.

Consider, for example, transport policy – about which I have written extensively in recent weeks. On paper, it is described through the National Transport Masterplan which envisages both physical improvements to the road network as well as specific initiatives to limit cars on our roads. It is obvious that bottlenecks have to be addressed, but it is just as obvious that there is a practical limit to the size of our road network.

Studies all over the world have clearly shown that addressing traffic congestion through expanding the road network has only postponed the problem and has either moved it physically to another area, or else moved it in time.

Addressing the sustainability of transport policy means that we should get to grips with the basics of mobility issues: the movement with ease from one point to another at all times. Unfortunately, this is not being done. This is reflected in the large number of contradictions encountered in the various aspects of transport policy and ranges from the electrification policy to the policy on the development of fuel stations.

A long-term view of transport policy would have easily made short shrift of the fuel service station policy. The fact that the electrification of motor vehicles will shortly commence and will be spread over a number of years, makes it  pretty obvious to one and all that, at the end of the process, the number of fuel service stations required will be insignificant. A Transport Ministry guided by the basic principles of common sense would have easily understood this basic point and acted accordingly.

The politics of sustainable development still needs to be ingrained in the day-to-day policy-making structures. If this is done, we will be in a position to weed out glaring contradictions and, as a result, be in a position to produce policies which promote the interests of all.

The need for adequate traffic management is apparently, at last, very high on the list of matters preoccupying the Maltese public. The solutions to the problems we face, however, depends on the behaviour of each and every one of us.

Traffic congestion is a constant irritation, as our roads are clogged for longer periods of time and in addition to wasting an ever-increasing amount of time in traffic, we are simultaneously constantly reducing the quality of the air we breathe.

I do not dispute that improving the road network eases the flow of traffic. However, it has to be stressed that this is only a short-term measure. Adjusting the roundabout at Manwel Dimech Street in Qormi or the traffic lanes close to the airport or constructing flyovers at Kappara and Marsa will address and rationalise traffic movement now.

However, this further development of the road infrastructure is simply an encouragement for more cars to use our roads. It is only a matter of time when it will be the turn of the new developments to burst at the seams.

The present state of affairs is the direct result of the long-term neglect of transport policy. Public transport – as well as alternative means of transport – has been given the cold shoulder for far too long.

We require a transport policy that actively encourages the reduction of the number of vehicles on the road. Having around 800 cars on the road for every one thousand people in a small country is ridiculous. The small distances between localities in Malta and Gozo should make it much easier to encourage a reduction in dependence on the privately-owned car. Initiatives can be taken on a local level as well as between neighbouring localities. In such instances, it can be much easier to encourage the use of bicycles or the use of public transport or even to walk short distances: our health will surely benefit.

Isn’t it about time that we claim back ownership of our streets? We need more pedestrianised streets inaccessible to cars at any time of the day in every locality in Malta and Gozo. More streets need to be traffic-free, safe for children and parents to walk to school and back. We also need wider pavements for the use of pedestrians (not for tables and chairs to service catering establishments).

In the 2016 Budget speech, Finance Minister Edward Scicluna announced that, during 2017, government entities should be finalising sustainable transport plans. In the coming weeks these should be made public and, as a result, we expect that all government entities will commence addressing the mobility requirements of their employees and their customers. If carried out properly, this exercise could also impact on the private sector thereby (hopefully) substantially reducing a substantial number cars from our roads at peak times. In turn, this could have a considerable impact on public transport because with fewer cars on the roads, it should be more efficient.

Concurrently, government should also address the proposal to electrify the whole private transport sector through banning petrol and diesel cars from our roads, after a reasonable transition, and switching over to cars running on electricity. In Malta, this proposal was launched as part of Alternattiva Demokratika’s 2017 election manifesto. Since then, it has also been taken up by the French and UK governments. Removing petrol and diesel cars from our roads would substantially improve the quality of the air we breathe in all our localities and consequently in the long term will contribute to a considerable reduction of respiratory ailments.

This is the only way forward by which traffic is brought under serious control simultaneously ensuring sustainable mobility and improving the quality of our air.

published in The Malta Independent on Sunday : 10 September 2017 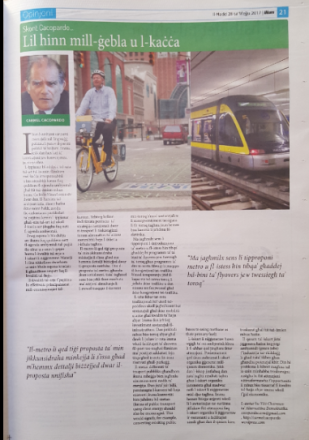 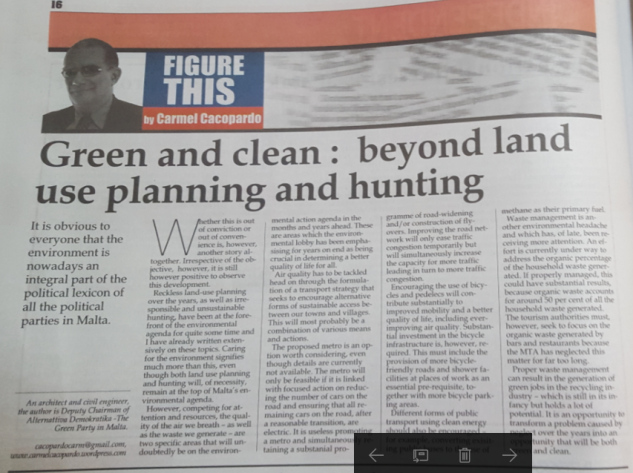 It is obvious to everyone that the environment is nowadays an integral part of the political lexicon of all the political parties in Malta. Whether this is out of conviction or out of convenience is,  however, another story altogether. Irrespective of the objective, it is still however positive to observe this development.

However, competing for attention and resources, the quality of the air we breath – as well as the waste we generate – are two specific areas which will undoubtedly be on the environmental action agenda in the months and years ahead. These are areas which the environmental lobby has been emphasising for years on end as being crucial in determining a better quality of life for all.

Air quality has to be tackled head on through the formulation of a transport strategy that seeks to encourage alternative forms of sustainable access between our towns and villages. This will most probably be a combination of various means and actions.

The proposed metro is an option worth considering, even though details are currently not available. The metro will only be feasible if it is linked with focused action on reducing the number of cars from the road and ensuring that all remaining cars on the road, after a reasonable transition, are electric cars. It is useless promoting a metro and simultaneously retaining a substantial programme of road-widening and/or construction of flyovers. Improving the road network will only ease traffic congestion temporarily but it will simultaneously increase the capacity for more traffic leading in turn to more traffic congestion.

Encouraging the use of bicycles and pedelecs will contribute substantially to improved mobility and a better quality of life, including ever-improving air quality. Substantial investment in the bicycle infrastructure  is however required. This must include the provision of more bicycle friendly roads and shower facilities at places of work as an essential pre-requisite, together with more bicycle parking areas.

Different forms of public transport using clean energy should also be encouraged – for example, converting existing public buses to the use of methane as their primary fuel.

Waste management is another environmental headache, and which has, of late, been receiving more attention. An effort is currently under way to address the organic fraction of the household waste generated. If properly managed this could lead to substantial results as organic waste accounts for around 50 per cent of all the household waste generated. The tourism authorities must, however, seek to focus on the organic waste generated by bars and restaurants as MTA has neglected this matter for far to long.

Proper waste management can result in the generation of green jobs in the recycling industry – which is still in its infancy but holds a lot of potential.  It is an opportunity to transform a problem caused by neglect over the years  into an opportunity which will be both green and clean.

published in The Malta Independent on Sunday – 28 May 2017