Throughout the past days the media has revealed a second-hand car racket as a result of which some of the used cars imported from Japan had their mileage meters tampered with. This in order to indicate that the cars were used much less than they actually were.

A considerable number of consumers have been duped into believing that they were making a deal when in reality they were victims of a fraud in which, inevitably, a number of persons were involved. Reports in the press have detailed the possible way in which the fraud was carried out. A specific garage and a printing press have been mentioned as possible accomplices in carrying out the resulting fraud.

At the time of writing two second-hand car dealers have been identified as being involved in this racket.

It is pertinent to enquire as to what checks were carried out by the regulator, Transport Malta, before carrying out the registration process of these imported second-hand cars. Apparently, no basic checking of the (falsified) documentation was carried out.

Accessing the JEVIC website reveals that Transport Malta requires odometer certification of passenger and goods vehicles by JEVIC prior to export. This information is also available online. Inputting the car chassis number and other relevant information about a second-hand car imported from Japan reveals electronically the certification details of the said second-hand car which details should correspond to the paper documentation issued by JEVIC.

A press release issue by Transport Malta on the 8 June, three days after the fraud was revealed by the media, advises consumers as to how to check if their second-hand car imported from Japan was tampered with. A seven-step instruction is available, ending with the following: if you have less mileage on your instrument cluster than on your JEVIC certificate, contact your car dealer for an explanation.

At this point in time, after the fraud has been revealed, there are many questions which require a clear answer. Topping the list of such questions is the manner in which Transport Malta carried out its regulatory duties when processing applications for the registering of second-hand cars imported from Japan. Apparently, no checks were carried out to verify the validity of the documentation submitted. If such a check was carried out it would have revealed the discrepancies which have now come to light and maybe some action would have been taken to protect consumers from this fraud.

Who was Transport Malta protecting with its silence?

Logical conclusions can be arrived at. One either concludes that the administrative setup at Transport Malta is incompetent or else that it is in collusion with the odometer tampering process. How is it possible to otherwise overlook such a basic check before proceeding to register imported second-hand cars? It is only now that, caught with its pants down, Transport Malta has published a seven-step instruction on how to check as to whether your imported car has been tampered with!

The Minister for Consumer Protection has exclaimed that these allegations shock “the system”. She even emphasised that there is zero tolerance for such fraudulent behaviour.

It would be much better if the Hon Minister ensures that authorities such as Transport Malta are run properly. At best, to date, those running the authority are downright incompetent, at worst in collusion. “The system” certainly needs to be shocked back on track, behaving normally against fraud and not facilitating it.

published in The Malta Independent on Sunday :12 June 2022 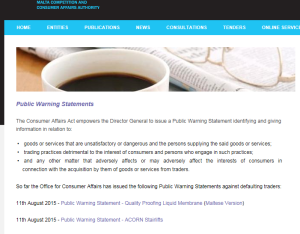 The Malta Competition and Consumer Affairs Authority should be an autonomous entity, independent from the Government, with its Board Of Directors appointed by a Parliamentary Committee, after a public call for applications..The MCCAA should put an end to monopolistic practices and Cartels, which often result in inferior products and services.