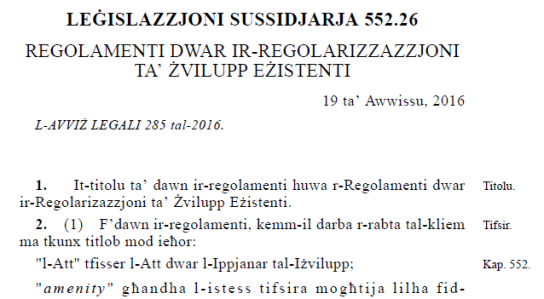 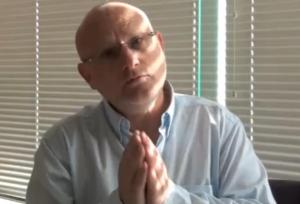 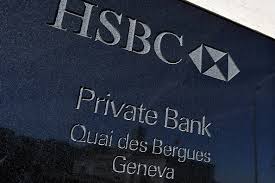 Joseph Muscat and the Labour Party pride themselves with emphasising that this Government has removed the statutory limitation (prescription) relative to corruption when holders of political office are criminally prosecuted.

It certainly was a step in the right direction. It still however requires the test of time to verify whether it is compatible with the human rights provisions of our Constitution and the European Convention of Human Rights as was explained by former Strasbourg Judge Giovanni Bonello in his article Bribery and Genocide : the same? (Times of Malta April 20, 2013)

Such a clear stand against corruption contrasts with the provisions of Legal Notice 256 of 2014 entitled Investment Registration Scheme Regulations 2014 which launched the latest amnesty that can be utilised by Maltese citizens who evaded payment of income tax. Camouflaged through the use of Orwellian terminology as an “Investment Registration Scheme”, this amnesty, as others before it, did not treat holders of political office any differently from other tax evaders. It afforded them the same opportunities to be able to “regularise” their position absolving them from having committed an economic crime.

Apparently, this government considers tax evasion to be a crime which is substantially inferior to corruption. In fact, the recent cases brought to light by Swiss Leaks have revealed the ease with which former Cabinet Ministers have wriggled out of their tax evasion crimes that they had successfully concealed for around 40 years, including when in office.

During all these years, most of the funds which were accumulated in various bank accounts until they ended in an HSBC Genève account, reaped interest at varying rates depending on market conditions, which, as a result, increased the quantum of the undeclared funds. Had both the funds originally invested as well as the accumulated interests  been appropriately declared to the tax authorities in Malta , they would have been subject to between 35 per cent and 65 per cent  taxation in terms of Income Tax legislation. Yet the Investment Registration Scheme of 2014 allows self-confessed tax evaders off the hook subject to a  maximum 7.5 per cent registration fee! They even get a discount if they repatriate the funds! Apparently it pays to be a tax evader.

There are, however, some matters  which are not at all clear, yet.

Before insisting on his imaginary “right” not to be pestered by the press, former Minister Ninu Zammit had informed The Malta Independent on Sunday  that all his affairs were now “regularised”, having  made use of the 2014 amnesty to reap the benefits of his hoard stacked in Genève. He was also reported as having stated that the sources of his hoard was income derived from his professional activity  as well as various deals in landed property.

As far as I am aware,  Legal Notice 256 of 2014 only absolves self-declared tax-evaders resident in Malta from their non-observance of income tax legislation. Other crimes could still be actionable .

Such other crimes would include false declarations to Cabinet in terms of the Ministerial Code of Ethics. There may also be other issues should these result from the investigations which the Commissioner of Inland Revenue is currently carrying out on the basis of the information which is now known.

There is however one important thing which we should never underestimate. The benevolence of the state towards tax evaders has no limits. It knows how to take care of these small details too.

published in the Malta Independent on Sunday – 1st March 2015 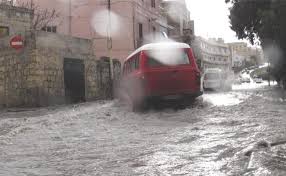 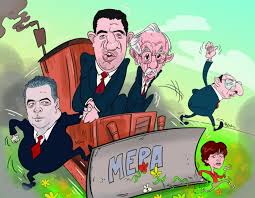 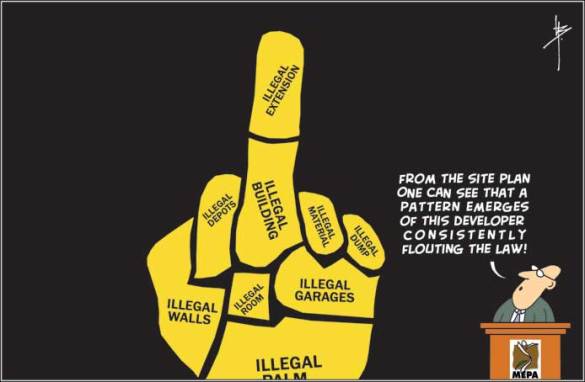 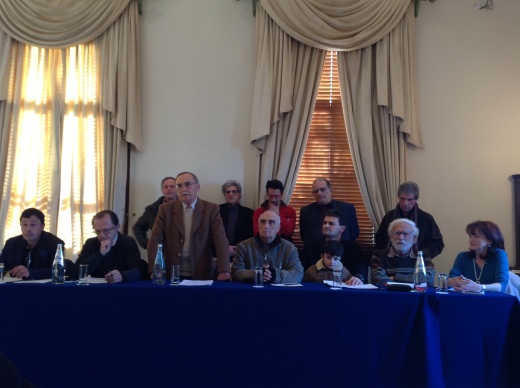 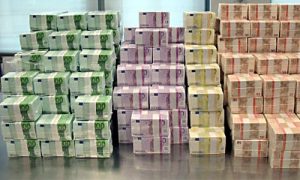 A building development amnesty is in the pipeline. It is being handled by MEPA. No one is yet aware as to whether this is a MEPA initiative or else whether MEPA was instructed by the government to prepare a proposal. Nor is anyone aware as to whether there will be any public consultation on the matter. Only one thing is clear: development abuse will be given the green light as long as you can afford to pay for it.

From what is known so far on the proposed amnesty, it will be possible to pay your way around building development policies and regulations: around some of them at least, and subject to some limitations.

Infringement of land use policies and regulations can take various forms.

Building within a development zone without a permit, while being a serious infringement, does not require an amnesty. Existing legislation already addresses the matter and provides for sanctioning. This would be the case if the development carried out conforms with existing policies and rules and subject to the payment of already established fines. Problems may arise if sanctioning is not possible due to non-observance of height limitation rules or sanitary regulations. Current rules do not permit the sanctioning of buildings not in conformity with existing height limitations. Will the proposed amnesty permit such buildings? If the amnesty does permit the infringement of existing height limitation rules, this would mean that height limitation rules all over the islands might just as well be shredded.

What about non-observance of sanitary regulations? From comments in the media, attributed to the MEPA CEO, this is apparently a major justification for the proposed amnesty. An amnesty was already introduced through Legal Notice 229/2012 in July 2012 permitting variations to the dimensions of yards and the minimum internal height of buildings.  This 2012 amnesty was intended to regularise the position of dwellings whose backyards/internal yards as well as whose internal height were smaller than the required minimum.  The 2012 amnesty was not only about minor infringements. The 2012 amnesty made it possible to regularise variations of up to 35% of the yards’ dimensions. This is substantial, and is not limited to just a few centimetres variation!

The 2012 amnesty was unwarranted. Current legislation already provided sanitary authorities with the tools required to consider variations from sanitary permit conditions. In fact the Code of Police Laws in article 97(1)(p) establishes that when an exemption from the rules relative to the permissible dimensions of yards is being considered by the authorities, it must be ensured that this may be “granted without detriment to the wholesome condition of the house or of other houses in the vicinity”.  This legal guidance inbuilt in our legislation grants the authorities a degree of leeway to sanction variations (even more than those few centimetres variation), but in so doing the authorities must ascertain that the impacts of these variations are contained. In particular, the authorities are duty bound to ensure the protection of third parties when considering exemptions of sanitary rules. Yet even the 2012 amnesty ignored impacts on third parties and rewarded abusers by going beyond the consideration of minor misdemeanours. On the basis of the available information, the newly planned amnesty will follow the same path.

Sanitary rules applicable to dwellings serve the purpose of protecting our health. Appropriately sized yards are intended to ensure adequate ventilation in our homes; a measure intended to guarantee the quality of air indoors. This is essential to ascertain that buildings are habitable. As minor variations in the sizes of yards can already be permitted through these same rules, so what, may I ask, is the purpose of increasing the possibility of variations? Quite obviously, addressing minor variations is not the target of the amnesty as these are already addressed. Apparently, it is planned to target substantial variations which go beyond what the 2012 amnesty addressed.

Reports indicate that the proposed amnesty would also address buildings outside the development zone (ODZ) not covered by a development permit or not built in accordance to a valid development permit. In the past months we have already had the opportunity to discuss the Rural Policy and Design Guidance 2014, which, while consolidating (with amendments) in one document all existing ODZ polices, extended the possibilities of development in rural areas.

Applying an amnesty to areas outside the development zone signifies that it may well be the intention of the amnesty drafters to create another loophole, as a result of which rural land abusively developed in the past would be given the green light. For example, the owners of illegal villas constructed in the ODZ may be rewarded. This would be over and above the controversial development rendered permissible through the Rural Policy and Design Guidance 2014.

Having considered the above, it is legitimate to ask whether ignoring the law and policy regulating land use is a new form of investment in Malta, reaping substantial dividends: the spoils of environmental crime. Apparently, the authorities think that only fools observe the law. The rest can pay their way around regulations and policies.

What is the purpose of having laws establishing standards if the authorities, on a continuous basis, encourage abuse through amnesties and lack of enforcement action?  If the proposed amnesty proceeds as indicated, Malta will be sending out one clear message: it pays to ignore the law. Crime pays, and the state will come to your rescue to ensure that you cash in on your investments.  If the planned amnesty proceeds, the government will be an accomplice in environmental crime.

The Republic of Malta should not to be governed in this manner.

published Sunday 8 February 2015 on The Malta Independent on Sunday 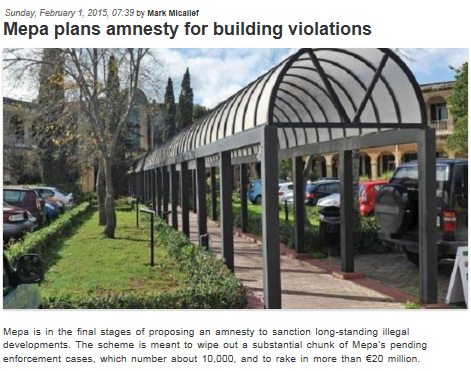