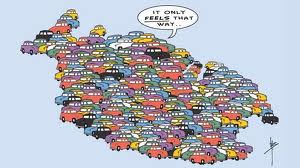 The government is apparently worried about parking problems being faced by practically all localities in Malta and Gozo. In fact, during a press conference by Transport Minister Joe Mizzi in Rabat recently, it was stated that a policy document on parking has been submitted for Cabinet’s consideration, prior to its being issued for public consultation. As usual, the government worries about effects and is very rarely willing (or able) to exercise some thought on the causes of the everyday problems we all face.

The National Statistics Office says that at the end of the Third Quarter of 2014, Malta had 332,455 vehicles on its roads.  With a population of around 421,000 this translates into 790 vehicles per 1000 population, one of the highest vehicle ownership profiles in the world. Being one of the smallest countries, with everywhere being within easy reach, it would be logical to expect that Malta should have a much different and lower vehicle ownership profile. This also sharply contrasts with the vehicle ownership profile of the USA (786), Italy (682), UK (516), Spain (592) and Switzerland (573). Even Luxembourg’s profile which stands at  741 per thousand is lower than Malta’s.

To visualise the severity of the problem, it is being stated that if Malta were to have a vehicle ownership profile of say 500 vehicles per thousand population (close to that of the United Kingdom  which currently stands at 516), the total number of vehicles on Maltese roads would be 210,673, that is a reduction of 121,784 vehicles from the current total. This would amount to a reduction of 36.63% of vehicles on Malta’s roads at present. This I submit is a realistic objective that we should aim for: reducing 122,000 vehicles from Malta’s roads.

Thus the issue which  should be tackled by Malta’s Minister for Transport is not one of seeking space for parking but reducing the number of vehicles on our roads. While parking is a problem, which will undoubtedly get worse, it is not the major transport problem in Malta.  Extensive car ownership is “the” problem. Too many vehicles on the road is not a sign of affluence but a clear indicator of administrative incompetence throughout the years. This should be the primary target of transport policy: facilitating sustainable mobility for all while reducing radically the number of vehicles on the road, thereby reversing the accumulated impacts of administrative incompetence.

Unfortunately, the government’s objective so far seems to be the precise opposite: making way for more vehicles on the road. This is the only real significance the parking policy-in-waiting or of major transport infrastructure projects in the pipeline which absorb millions of euros. These funds  could easily be used to promote more fruitful objectives.

It should focus on facilitating sustainable mobility for all while reducing vehicle ownership as a policy target would address traffic congestion, parking and air  and noise pollution. An added benefit would be that it would also cost much less to both the state and to the individual. In the long term, as a result of reduced air pollution, we will also have less respiratory illness, consequently reducing both the individual as well as the national health bill. Fewer cars on the road would also encourage more bicycle use and maybe the introduction of more and continuous bicycle lanes in contrast to the intermittent ones currently provided by Transport Malta.

This cannot be done overnight. Having been neglected for the past 50 years or so, it will take quite some time to reverse the dependence on private vehicles nurtured by a public transport system which was allowed to disintegrate. Various policy initiatives can be taken. Both the carrot and the stick have a role in such policy initiatives.

A number of interim measures may need to be introduced until such time as the new public transport provider, Autobuses de Leon, establishes itself firmly. When this is done, it is in everybody’s interest that public transport use is the success it never was to date.

A public transport system has to be both efficient and reliable. To achieve these objectives substantial subsidies are essential. This is the primary reason why the Arriva experiment failed. It was starved of subsidies as a matter of policy and was expected to survive on a relative pittance.  Even on the drawing board, it was clear from day one that the Arriva experiment was doomed to fail.

Public transport is not made up just of the public buses. The monorail initiative currently on the drawing board as well as adequate sea-transport  [servicing primarily Valletta, Sliema and the Three Cities] will also go a long way to reduce th number of  vehicles from our roads.

These are the policies which the government should consider implementing. Will it be bothered?

published in the Malta Independent on Sunday: Sunday 4th January 2015 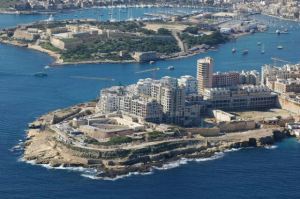 The publication of the State of the Environment Report (SoER) for 2008 is an opportunity to take stock of the manner in which environmental responsibilities are being shouldered or neglected. One point the SoER fails to inform about is the link between overdevelopment and a negative social and environmental impact on the community.

Tigné peninsula in Sliema is a suitable example.

Two of the mega-projects in Tigné, namely the Midi and Fort Cambridge projects, have government fingerprints. The social and environmental impacts on the Sliema community more than outweigh the economic benefits derived. Yet, they have been given the go-ahead. While these two mega-projects were approved by Mepa, a third (Townsquare) is being processed. Other projects of various sizes and impacts have been approved or are in the pipeline both in Tigné and in other parts of Sliema.

Focusing on the macro-scale, three main issues need to be addressed: vacant dwellings, traffic generation and the quality of air.

In my opinion, given the large number of vacant dwellings, further large-scale development is not required. About 54,000 vacant dwellings were identified during the 2005 census and this number has been on the increase ever since.

Newly-constructed dwellings may or will be occupied but they are still the cause of a disintegration of the existing urban fabric in various localities as a result of an internal migration away from existing settlements.

Some areas are being depopulated, awaiting their turn to be demolished and redeveloped after someone makes a quick buck. The few remaining tenants are then squeezed out by “developers”. Some years back, an old lady at The Strand, Sliema, was faced with buildings being demolished all around (and above) her home in order to persuade her to move out.

This is resulting not just in urban decay but also in the forfeiture of an accumulated social capital.

This is not surprising in a society that only appreciates financial capital. Unfortunately, public authorities are on the same wavelength.

The 710 vehicles on the road per 1,000 population (2008 figures) is substantial. In a small country, rather than being a sign of affluence, this vehicle per capita ratio is the clearest indicator of the failure of public policy to address issues of sustainable mobility over the years. Past governments have been ineffective in this respect. The large number of dwellings being constructed at Tigné peninsula begs the question as to where the substantial additional traffic generated is to be accommodated. I am referring to both the traffic directed at the new residences and that directed towards the new commercial outlets. Roads in Malta are already bursting at the seams.

When Mepa is approving more intensive development through the construction of high-rise buildings, it is not giving sufficient weight to these impacts. In particular, it is ignoring the cumulative effects of so large a number of developments in so restricted a space.

A Strategic Environment Assessment (SEA) of the local plans and planning policies would have pinpointed these shortcomings had it been carried out. Yet, the government tried to wriggle out of its responsibilities by clinging to a loophole, which exempted it from applying the SEA to policies on land-use planning. This has been done by a government that boasts about the central importance of the environment in its electoral platform. Yet, when push comes to shove, it wriggles out of its commitments.

Quality of air data is only made available relative to 2006 and 2007 in the SoER indicators.

Limiting my comments to the 2007 data relative to the Msida station, the available SoER indicators clearly show that PM10 measurements exceeded the EU limits on 24 per cent of the days measured and were very close to the permissible limit of 50μg/m3 with respect to the rest.

PM10 measures particulate matter, having a diameter not exceeding 10 microns. The primary source of such particulate matter, as is also emphasised by the SoER indicators, is fuel combustion from traffic and power generation. It is therefore clear that heavy traffic increases the incidence of PM10 with the consequent risks of a greater incidence of respiratory diseases. Studies carried out in Fgura and Żejtun in the 1990s point in this direction too.

These are the risks posed by an increase in traffic in an area such as Sliema, which is already heavily congested.

The issue of development has so far been considered within the framework of the rights of the owners of the property to be developed. It is about time that the rights of the community are factored in as, to date, they are not being given sufficient weight. In particular, the cumulative impacts of development are being ignored. This is applicable not just to Sliema but to all Maltese territory.

The net result is a quality of life which could be much better.