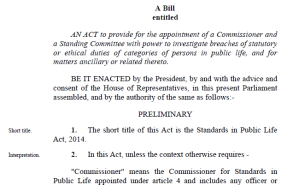 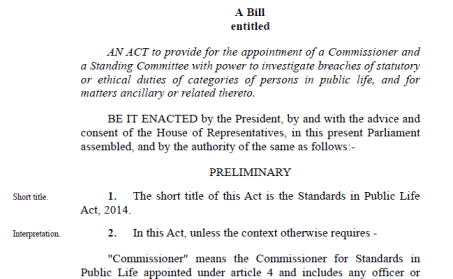 The Bill regulating Standards in Public Life has been pending on Parliament’s agenda for months.

It seems that government is in no hurry to implement its provisions, notwithstanding that this Bill is the result of discussions carried out in a Parliamentary Select Committee under the Chairmanship of the Speaker of the House of Representatives.

The final report of the Select Committee was submitted to Parliament on 24 March 2014. Two months later, on 20 May, a Bill entitled Standards in Public Life Act, 2014 was given a first reading in parliament. It was subsequently published in the Malta Government Gazette on  15 July 2014 and placed on Parliament’s agenda, where – 16 months later it remains .

The Bill seeks to create the necessary structures to ensure that breeches of statutory or ethical duties by specific categories of persons in public life are investigated. Monitoring and investigation will be vested in a permanent Parliamentary Committee, as well as through a Commissioner for Standards in Public Life, who will be appointed subject to the approval of two-thirds of sitting MPs.

Two categories of persons in public life are subject to the provisions of the proposed legislation: MPs (including Ministers, Parliamentary Secretaries and Parliamentary Assistants) as well as those  employed in a position of trust in all areas of the public sector.

The Commissioner for Standards in Public Life will be able to investigate allegations regarding unethical behaviour as well as the veracity of declarations on income and assets held which are made by MPs, members of Cabinet and persons employed in a position of trust as detailed in the applicable Codes of Ethics or rules made under the Public Administration Act.

The Commissioner will not be able to investigate past transgressions retrospectively. Moreover, it is proposed that there will be a time limit of two years for action to be taken on present day breeches.

In a recent interview the Speaker of the House said he is not satisfied with MPs’ assets declarations. He also said that, as things currently stand, he does not have any authority to investigate these declarations.

The Bill currently pending on parliament’s agenda assigns this specific authority to the Permanent Select Committee, which will be chaired by the Speaker, and to the Commissioner for Standards in Public Life. Cases such as those that recently surfaced concerning former Health Minister Joseph Cassar could be considered and acted upon within this proposed framework.

In respect of non-MPs, the Committee will either take a decision, or, if the matter so requires, refer the case for further investigations by the Commissioner of Police or the Permanent Commission Against Corruption. In respect of MPs, it will refer the recommended decisions to the House of Representatives for a decision.

Most readers would  express serious doubt as to whether, given the present composition of Malta’s Parliament, it is possible to have an objective assessment of recommendations made by the Commissioner or the Standing Committee on allegations of unethical behaviour or misleading and/or incorrect declarations of assets.  It is difficult to imagine how Malta’s Parliament, divided as it is into two opposing camps, could take objective decisions on cases similar to that of former Health Minister Joe Cassar. It goes without saying that the debate and decisions would be highly charged along partisan lines.

I may be wrong, but, in my opinion, unless the decision-taking procedures proposed in the Bill Regulating Standards in Public life are heavily revisited, the proposals may not lead to an effective instrument with which to address unethical behaviour by holders of public office.

published in The Malta Independent on Sunday : 8 November 2015