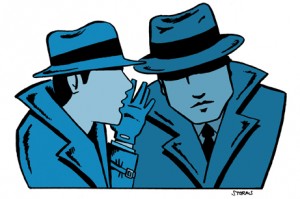 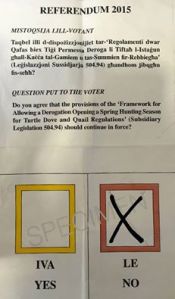 This first abrogative referendum campaign is about much more than birds. It is about the empowerment of civil society in Malta. Yet those who oppose the abrogative referendum have opted to  sow fear.  As it is only through fear that they envisage that it is possible to wreck these first steps of civil society in reclaiming its rightful role in the decision-taking process.

Last Thursday it was made known that Sandro Mangion, the Editor-in-Chief at Union Print was threatened as a result of expressing himself in favour of a NO vote on 11 April. Just three days earlier he had written a post on his facebook wall to state that after much deliberation he had arrived at the conclusion that he should support the birds and vote NO  in Malta’s first abrogative referendum.

Sandro Mangion on 23 March published the reasons which led him to conclude that supporting the NO vote on 11 April is the way forward. In a 430 word post, Mangion explains that his primary motivation in arriving at such a conclusion is the need to ensure that during spring all Maltese families have an unrestricted access to the countryside.

Sandro Mangion explains that his decision was the result of a long process through which he examined and discussed all the available information on the issue. Building development, states Mangion, has already gobbled up a substantial area of what was previously countryside.  It is not fair, states Mangion, that due to  the spring hunting season the remaining available public land in the countryside is not accessible to all Maltese families during all of spring .

Some hunters, added Mangion shoot at anything that flies. Even if few in number, these hunters  are a serious threat to the survival of a number of species of birds which migrate over Malta. Abolishing spring hunting would make it easier to enforce the law as illegalities would no longer be camouflaged by what is permitted hunting in spring.

Sandro Mangion emphasises that he is not against legal hunting during the rest of the year.

He concludes his arguments by stating that what was acceptable yesterday is no longer acceptable today. It is quite normal for laws and regulations to change (gradually) to reflect society’s development.

Sandro Mangion’s arguments are fair and objective. He develops his arguments in deep respect towards the hunting community and the YES campaign. No insults. No threats. Just logical arguments which explain why he arrived at a conclusion that he should cast his vote in support of the abolition of spring hunting in Malta.

On Thursday Mangion published the first words of the threat which he received: “If the referendum on the hobby that my family members and I hold dearest goes through, then YOU will be the first person that we…”  the message read.

This is a reaction which denotes an allergy to reason. This is an immature reaction from someone who is so accustomed to bullying his way through (directly or through his representatives).

Sandro Mangion was not the only person supporting the NO vote on 11 April to be insulted (and threatened). Earlier during the week obscene language against Moira Delia was scribbled on a wall in the scenic Ramla Bay valley in Gozo.

Unfortunately the hunting community in Malta is accustomed to bullying its way through. This has been happening repeatedly throughout the years when they succeeded in holding the Parliamentary political parties on a leash.

The abrogative referendum of  11 April is the reply of Maltese civil society to the bullying techniques employed by the hunting lobby to date. It is the first time that civil society has got together to coordinate a reply to arrogance through the ultimate democratic tool.

It is a process that will inevitably lead to the empowerment of Maltese civil society which is slowly realising that it can act decisively to reverse unacceptable decisions taken by Parliament and/or Government such as permitting spring hunting.

A majority in favour of a NO vote, abolishing spring hunting in Malta, will ensure that birds are protected in spring. It will also send a clear message that Malta cares about the environment.

Civil society in Malta will come of age on 11 April.

published in The Malta Independent on Sunday : 29 March 2015 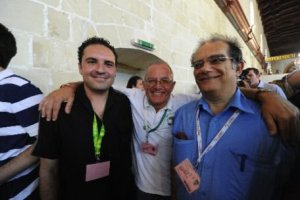