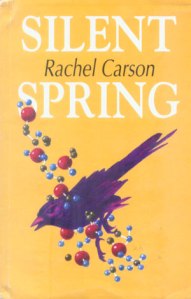 In 1962 Carson, a zoologist, argued that the use of pesticides had unintended consequences as whilst pesticides targeted pests they ended up affecting birds and their offspring. The result being a decrease in the bird population brought  about by intoxication as a consequence of the poisoning of the food chain.

Rachel Carson was the first person to give a popular voice to ecological concerns. In so doing she laid the foundations of environmentalism. It can be safely stated that her Silent Spring was the trigger of popular ecological awareness in the United States and Europe and to the consequential setting up of environmental NGOs as well as Green Political Parties.

Today’s generation is indebted to Rachel Carson for a powerful environmental movement in the four corners of the earth. We owe to her the popular awareness and understanding of nature’s fragility.

But obviously awareness and understanding is not sufficient. It must be our motivation to act. Planet Earth, fifty years after Silent Spring was published, is in a much worse state then ever. It has a temperature, it is warming up. Sea levels are rising. The climate is changing to one of less frequent but more intense storms which leave a trail of havoc in their path.

Waste is not sufficiently understood as an underutilised resource.

The sea has also been heavily polluted and its resources plundered.

Consider the following observation made by Callum Roberts oceanographer at York University.

“The seas are the ultimate sinks. Chemicals get washed out of the soil and into streams and rivers. They should settle on the sea bed and stay there. However, fishing has become so intense, with boats dredging up scallops and bottom-welling  fish all the time, that we are constantly ploughing up these toxins, including DDT, and stirring them back into the water.”

The environment movement was born 50 years ago to make a difference. It was born out of a love for nature but is not restricted or limited to nature.  It has set out to implement  a green revolution : bettering our quality of life and as a result bequeathing a planet earth in a better state of health to future generations.