The film Dear Dom has elicited contrasting reactions. It reflects the whims of the man. Initially being way ahead of his contemporaries, he ended up detached from the effects of the changes which he pursued.

He rightly wanted Malta to exit the soonest from its Middle Ages. The temporal powers of the Church run by an archbishop-prince and the colonial rulers were his first targets. Deliberately he opted to bully his way through. The bulldozer was Dom Mintoff’’s preferred operational tool and strategy. Initially used against the colonisers and the Church it was subsequently used by Mr Mintoff against his own people.

His oratory as well as his negotiating skills were central throughout his political career. He radically reformed and expanded the welfare state created by his predecessor as Prime Minister and Labour leader, Sir Paul Boffa, whom he toppled after accusing him of not being capable of standing up to the colonial masters.

Mr Mintoff’s strategy of seeking to improve the nation’s standard of living through integration with the UK stood in stark contrast to that of his nemesis George Borg Olivier who opted for independence as the tool to improve Malta’s living conditions. Mr Mintoff’s strategy to achieve integration failed and eventually he turned to Plan B: to follow the road leading to independence, patiently developed by Dr Borg Olivier. He couldn’t stand that, as playing second fiddle was not his game.

Dr Borg Olivier was patient. Mr Mintoff was not. Independence for Dr Borg Olivier was a gradual process starting with the essentials of self-government and slowly building up the county’s infrastructure: a prerequisite for its social and economic development. That was too slow for Mr Mintoff’s temperament. His attitude was one seeking absolute control at day one. His pace was much faster than Dr Borg Olivier could ever get accustomed to. This was reflected in Mr Mintoff’s style of negotiations, in his demands and in the stormy foreign relations which developed as a result of his approach.

Mr Mintoff’s followers embarked on many a violent spree. One may trace the justification of violence as a political tool in the debate and declarations leading to the Independence Round Table Conference, in particular in what are known as Labour’s six political points (is-sitt punti). Lino Spiteri interviewed in Dear Dom, qualifies this reference to violence as a necessary tool in the rebellion against the colonial powers. While that was indeed one of its earliest manifestations, unfortunately it eventually became a tool for all seasons, when Mr Mintoff lost control of the hangers-on which surrounded him, including the notorious members of his Cabinets, those who had their own “bully boys”.

Violence shamed Mr Mintoff and the Labour Party many a time, most notably when The Times was burnt down on Black Monday, October 15, 1979. In 1984 even his handpicked successor was embarrassed when supporters (labelled as the aristocracy of the working class) went berserk at the Archbishop’s Curia and destroyed all they could see.

Mr Mintoff was not capable of standing up to the criminal behaviour which slowly developed around him until it engulfed him and his party. This was recently described by former Air Malta chairman Albert Mizzi in an interview carried in The Sunday Times on March 25. Mr Mizzi stated: “I remember one time when someone mentioned something to him about corruption. He turned to me and said, is it true? I replied: ‘That what’s people are saying’. His response was: ‘What can I do if that person has helped me to build up the party? Can I take action against him?’ You see, this is small Malta.” That is Mr Mintoff at the mercy of his sycophants: those who helped him build his party and then proceeded to squeeze it dry until the pips squealed.

Bullying of opponents was an essential characteristic of Mr Mintoff’s method of government. Obviously those who benefited from his methods and actions think otherwise.

They consider it as a minor and insignificant blip. Those at the receiving end tend however to recognise it as an essential element of the man’s method. Positive politics is less relevant if the implementation method adopted is unacceptable. As a result Labour’s achievements under his leadership related to the welfare state and the general upgrading of the rights of working men and women will be forever overshadowed.

Coercive methods were characteristic of the man who sought to achieve his targets by hook or by crook. The shareholders of the National Bank of Malta, their heirs and all those who stood in his way are living testimony to Mr Mintoff’s methods. He bullied his way through all opposition: in his party, in Parliament, in civil society, in industrial relations and in the economy. His bullying of intellectuals bequeathed an inheritance of mediocrity to his Labour Party.

When the historical dust will have settled there will be one issue which sticks out in defining the man. It will not be the welfare state but his political bullying which shaped his party for a generation. 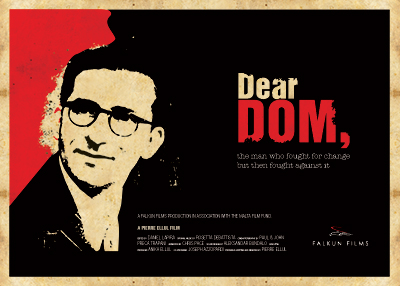 After that superficial film “Dear Dom” has been showing for some time, given that a large number of Maltese citizens are shocked as to the content of the said film (how dare he) I would humbly suggest an alternative based on the following 6 points :