On Friday afternoon, delegations from Alternattiva Demokratika and Partit Nazzjonalista met to discuss whether – and if so to what extent – it would be possible to forge a pre-electoral alliance between the two political parties in view of the forthcoming general election.

Earlier in the day, the PN delegation had briefed the press on the approval by the PN Executive Committee on Thursday of an agreement between the PN and the Democratic Party of Marlene Farrugia.

AD has criticised the PN in the past, and will continue to criticise it whenever it considers such criticism necessary.  The PN has been criticised by AD for its performance in office as well as for the discrepancies between what it declares as its beliefs and how it then subsequently acts. Such criticism does not exclude the possibility of cooperating with the PN and the possibility of considering the forging of an electoral alliance, provided the right conditions are created.

AD has criticised the PN for not properly handling its MPs.

Claudio Grech’s declaration that he did not recollect ever meeting George Farrugia of oil corruption fame is incredulous: yet Simon Busuttil did not take him to task publicly on the matter. It was necessary, but he did not do it. As a result, Simon Busuttil gave the clear message that he is weak when dealing with his MPs when they are evasive. This is not acceptable.

Nor was Beppe Fenech Adami chastised for his error of judgement in relation to the directorship  of Capital One Ltd: he should not be immune to disciplinary action.

Mario Demarco’s db consultancy ended up one notch higher, with an apology – a rare event in Maltese politics.  But Simon Busuttil’s role in the fake invoice debacle is still pending and he must come to terms with the facts at the earliest possible opportunity.

Toni Bezzina’s ODZ experiences, whilst pontificating on the merits of environmental protection, were also swept under the carpet by Simon Busuttil.

AD would have preferred to deal with a PN which does not come with this baggage, but everyone knows that this is not possible. To exacerbate matters, the Labour Party – the alternative – is much worse.

The Labour Party is in absolute shambles. This fact should not lead to the erasure or absolution of the PN’s misdemeanours: they are, and will remain, on the books, acting as a constant reminder of what should be avoided. But certainly they should never be forgotten. This is part of the baggage that the PN will bring to a pre-electoral alliance.

When considering the setting up of a pre-electoral alliance, one must understand that the result will be much more than the summing up of the individual parts. It should certainly denote a change in attitude and philosophy and should be accompanied by an appropriate name that reflects the new direction planned.

The selection of an appropriate name for the pre-electoral alliance is of paramount importance as it is the first indicator of a willingness to change. In addition, it has to be a true reflection of the political diversity in the DNA of the proposed alliance. It is only with clear signs of the will to change that voters will consider supporting the alliance.

Agreement on the general political principles that should guide the alliance is encouraging. These are primarily institutional and governance issues but also matters of basic environmental concern and governance.

At Friday’s meeting AD presented the PN with a detailed and specific proposal that set the tone of the discussion.

The identified stumbling block was the name of the proposed pre-electoral alliance. Unfortunately, the Democratic Party of Marlene Farrugia – most probably due to the inexperience of those advising her – did not realise the significance of the matter. She did not realise that accepting the PN as the alliance to which the Democratic Party was to be appended, was a very wrong signal.

The name should reflect the nature of the alliance: an umbrella organisation of separate and independent political parties cooperating in the political project of reconstructing Malta’s shattered institutions.  One thing should, however, be clear to everyone: AD will not be an appendage in the proposed alliance. AD will be an active and critical partner and not a subservient appendage.

published in The Malta Independent on Sunday – 30 April 2017

The Egrant Inc. story has been in the news for the past year: it has been developing for over the four years since the 2013 general elections, when it was set up together with other companies.

First we had Konrad Mizzi with his company Hearnville Inc. Then we had Keith Schembri with his company, Tillgate Inc. The matter became public when the Panama Papers were disclosed. Millions of hitherto secret documents about companies set up by public and private individuals all around the globe were made public.

The core of the issue is not the setting up of the companies but the objectives for which they were set up. Secret companies are normally set up for the concealment of financial and other assets in order to avoid the taxman or to conceal the fruits of corruption.

The owners of two of the companies are already known. One of them is Minister Konrad Mizzi while the other is the Prime Minister’s Chief of Staff Keith Schembri. Their identity was disclosed over 12 months ago, when it was declared that their Panama companies had not yet been put to use. When the Panama Papers were published it became known that correspondence with several banks had been exchanged relative to the opening of bank accounts for the said companies. Requests and commitments were spotlighted but Konrad Mizzi and Keith Schembri disclaimed any association with this correspondence and commitments identified.  No one believed them then.

The polemic went on and the focus shifted towards the third company: Egrant Inc. Who was its ultimate beneficial owner?

We should remember that the Panama Papers did not shed any light on the identity of the owner or owners of Egrant Inc. because this information was never communicated in a written manner: it was communicated over Skype. The message conveyed was immediately clear that in all probability some big-head was involved and that he or she was more important than Konrad Mizzi or Keith Schembri.  There was no room for imagination as the possible names were limited in number with the actual names being on the tip of everyone’s tongue.

On Thursday, a new chapter was opened. Daphne Caruana Galizia, on her blog, referred to documents that she said were in the safe of Pilatus Bank. These documents identified Michelle Muscat as the ultimate beneficial owner of the company Egrant Inc. It was also stated that this company received money transfers from Azerbaijan, including the sum of $1.017 million on the instructions of the daughter of Azerbaijan’s President Ilham Aliyev.

The level of detail described by Daphne Caruana Galizia’s blogpost indicates very clearly that this was based on the contents of bank documents. On Friday evening, additional information relating to a certificate of trust was published. This information, the validity of which was contested by Joseph Muscat, states that the company Dubro Limited S.A. and Aliator S.A.  hold shares in the company Egrant Inc. on behalf of Mrs Michelle Muscat.  But the documents from which this information is being extracted are still unpublished.  I do not know why this is so. It is necessary that these documents, fundamental to the issue under consideration, see the light of day. This is essential because the information published is being contested.

The information published is serious stuff. It may be the reason why Konrad Mizzi and Keith Schembri were not dismissed from office last year when the Panama Papers were published.

Pilatus Bank, Nexia BT, Joseph and Michelle Muscat have denied the published information.  Many are  convinced on the veracity of the story, but being morally convinced is not sufficient. Proof only results from authentic documentation but certainly not from demonstrations. It is for this reason that the full disclosure of all the documentation on which the published information is based is an essential  prerequisite.

published in The Malta Independent on Sunday – 23 April 2017 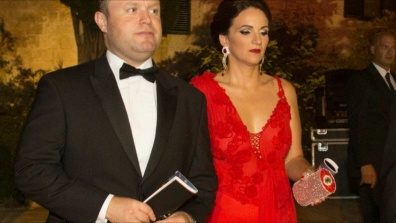