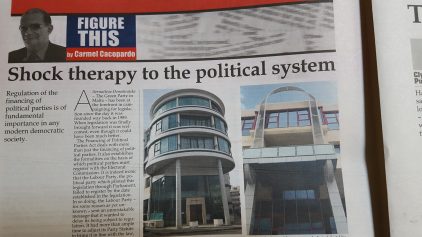 Regulation of the financing of political parties is of fundamental importance in any modern democratic society. Alternattiva Demokratika – The Green Party in Malta – has been at the forefront in campaigning for legislation since the day when it was founded way back in 1989. When legislation was finally brought forward it was welcomed, even though it could have been much better.

The Financing of Political Parties Act deals with more than just the financing of political parties. It also establishes the formalities on the basis of which political parties must register with the Electoral Commission. It is indeed ironic that the Labour Party, the political party which piloted this legislation through Parliament, failed to register by the date established in the legislation. In so doing the Labour Party – for some reason as yet unknown – sent an unmistakable message that it wanted to delay its being subject to regulation. It had more than ample time to adjust its Party Statute to bring it in line with the law, but it procrastinated for more than twelve months.

Earlier this week, the Electoral Commission announced that it would be setting up a Board to investigate allegations of breaches of the Financing of Political Parties Act that have been brought to its attention. As far as is known there are three such alleged breaches.

The first breach is that brought forward by Alternattiva Demokratika and involves the use of public property by the Labour Party Parliamentary Group for holding one of its recent meetings. I have already written about the matter in the 26 February edition of TMIS (Joseph tweets a selfie from Girgenti). On Friday the Secretary-General of Alternattiva Demokratika Ralph Cassar was informed in writing  that AD’s request for the Electoral Commission to investigate the use of the Girgenti Palace by the Labour Party Parliamentary Group will be taken in hand by the Investigation Board established for the purpose.

We are so used to the use and abuse of public property by the major political parties that it has, over the years, been considered a fait accompli, taken for granted. It may be a “minor abuse” compared to others in the news, but we cannot tolerate even the smallest breach of the provisions of the Financing of Political Parties Act.

The second breach is the one highlighted by the Labour Party regarding the Silvio Debono donations to the Nationalist Party. Silvio Debono has clearly spilled the beans in retaliation to the PN criticism of the ITS land at Pembroke being transferred for peanuts.  It is an issue of fake invoices and tainted donations as described in my article in this newspaper last week. The whole case rests on the existence of possible fake invoices by which illegal donations to the Nationalist Party could have been channelled through its commercial arm. If the investigating board is presented with the fake invoices, which Silvio Debono says he paid on prodding by senior members of the PN leadership, it is difficult to fathom how the PN can avoid carrying the responsibility for the matter.

The third breach has been highlighted by the PN, obviously against the Labour Party. It refers to a number of One journalists who have been selected to occupy positions of trust in various Ministries and authorities. The PN complaint list may have some mistakes, as some names are most probably erroneously listed, but I believe that it is correct to point out this corrupt practice through which the Labour Party media are being subsidised through state salaries – i.e. through the taxes that we pay.

The fact that these three alleged breaches will be investigated under the auspices of the Investigating Board appointed by the Electoral Commission is a step forward. However, it all depends on those selected to carry out the investigation.  I look forward to some shock therapy to the political system as I consider all three complaints to be justified. It is about time that both the Labour Party and the Nationalist Party are brought to their senses and made to realise that they, too, are subject to the law. But then, maybe I am hoping for too much from the Investigating Board!

published on The Malta Independent on Sunday – 19 March 2017