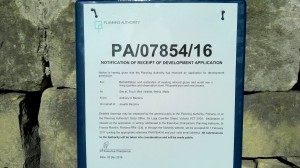 Planning application PA7854/16 submitted to the Planning Authority by Toni Bezzina PN spokesman on Agriculture, was downright misleading. This was underlined by environmental NGO  Din l-Art Ħelwa in its objection to the application it submitted on 31 January.

Bezzina’s development proposal emphasised that it was a “rehabilitation and restoration of almond grove”. However, on examining the submitted drawings it is immediately apparent that  the proposal actually includes the construction of a basement garage as well as a three-bedroomed villa with swimming pool.

In a normal scenario I believe that the Planning Authority decision-making process would have ultimately resulted in a rejection of such an application. I would not, however, have been surprised if it had been approved, as consistency in the interpretation of planning rules is still an ever-present issue.

The public outcry, however, has pre-empted all this and justifiably focused on the fact that Bezzina co-authored the recently launched PN environmental policy document entitled A Better Quality of Life for You. In that document Bezzina and others, on behalf of the PN, emphasised that development outside the development zone was to be an exceptional step that should only be permitted by Parliament and subject to approval by a qualified majority.

It was reasonably expected that Bezzina, as co-author of the policy document, should have been the first one to honour the commitment made. However he completely ignored it.

To make matters worse he was defended by the Leader of the Opposition who, after ensuring that Bezzina had taken steps to withdraw the application, did his best to minimise the inconsistency.

Unfortunately, this matter brings to the fore a very important consideration as to whether the policy documents issued  by the Nationalist Party have an significance at all. The very fact that PN spokesmen such as Bezzina ignore such documents gives credence to the point made that this was, after all, another PN green-washing exercise to which we have become accustomed in recent years. It is just more of the same.

After examining Bezzina’s application, the Environment and Resources Authority  had this to say:  “The substantial increase in the structure’s footprint and additional land take-up from other commitments, including the enlargement of the entrance, formation of a hard-surfaced access path, the creation of a turning circle, etc. will result in the formalisation of the entire site. Such development is not typical of a rural landscape such as the one in question and thus the proposal is considered to be unfit for the context especially when noting that the site is scheduled as an Area of High Landscape Value (AHLV).”

While the publication by the Nationalist Party of its policy document was a positive step,  proof of its commitment is yet to come, if it ever does!

published in The Malta Independent on Sunday – 19th February 2017