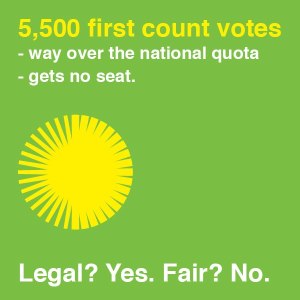 This process of restoring proportionality is discriminatory as it has been applied to the Nationalist Party but at the same time it has ignored the 5506 votes which were obtained by Green candidates at first count stage. Using the same criteria which have been applied to the Nationalist Party the Greens should have been allocated one Parliamentary seat on the basis of the total number of votes polled.  This would be in addition to the Parliamentary seats already allocated.

Both the PN and the PL speak of their being tolerant of the views of others yet when push comes to shove they have ensured that the electoral system squeezes out all possible alternatives to a two party Parliament.  Every voter has the right to be represented, yet 5,500 voters are being deprived of this right.

The Maltese Parliament is known as the House of Representatives. Its 69 members represent 98.2% of the electorate. The other 1.8% are represented by Alternattiva Demokratika-The Green Party which through the application of a discriminatory electoral law is being obstructed from taking up its Parliamentary seat.