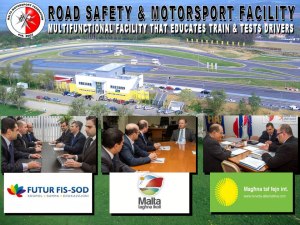 I attended yesterday’s business breakfast organised by the Malta Motorsports Federation on its proposal to build a Road Safety and Motorsports Facility in Malta.  The proposal requires a land area of between 33 and 40 hectares and it appears that government has already identified the land which could serve for this purpose. Indications given so far are that it is in the vicinity of the airport, close to Safi and Kirkop.

During the Business Breakfast the Prime Minister expressed qualified support for the project. He referred to issues of noise and financial feasibility as being basic and which in his view require to be addressed in more detail before government considers the matter definitely to take a final decision.

I also heard veteran entrepeneur Maurice Mizzi air his views. He agreed with the road safety aspect of the project whilst disagreeing with the motor sports part on the basis of noise pollution.

The two aspects of the proposed project are complimentary. The Motor Sports aspect is considered to be the revenue generating part whilst the Road Safety aspect will contribute to an organised professional drive to have better trained drivers. The road safety aspect of the project was defined by one of the foreign speakers as being a CSR driven project, a means through which Motor Sports channels back into the community profits which are generated.

The issues to be examined are not only those relating to financial feasibility and noise impacts as emphasisied by the Prime Minister. Air quality and the emission of particulate matter resulting from the fuels which will be in use has to be studied in detail. One has also to consider the fact that the localities in the vicinity of the airport are already subject to excessive noise pollution resulting from the operations of Malta’s International Airport.

With this in mind whilst emphasising that the proposed project may serve as a much needed educational tool to improve driving skills much more needs to be examined before it can be given the go-ahead.

Our community may reap great benefits from this initiatve through improved road safety. As to the sports aspect one has undoubtedly to consider further. Eventually a decision will depend on the technical parameters of the project, the proposed mitigating measures and the precise location of the site. Any decision has to await such time as these issues are clear. It has to be clear that the communities close by are not shouldered with more burdens. They have shouldered more than enough to date.

published at di-ve.com on Friday 8 February 2013