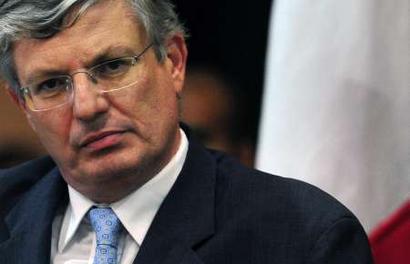 He considers himself to be “independent” so much that he did not bat an eyelid in accepting to present a TV discussion programme on the PN political TV station NET TV: l-Iswed fuq l-Abjad. Its independence can be attested by considering his choice of speakers and his myopic consideration of the  issues discussed.

In today’s edition of the Independent on Sunday Mr Calleja speaks of “restoring Malta’s reputation” when discussing the consideration by the EU institutions of Tonio Borg’s nomination as John Dalli’s successor on the EU Commission.

Calleja’s point is that The Green’s criticism of Tonio Borg’s nomination and credentials will tarnish Malta’s reputation.

It seems that those defending Tonio Borg’s nomination, including Mr Calleja, consider that he has only one positive point, that he is Maltese and they expect all to rally behind this nomination on the basis of his nationality.

Calleja fails to give due weight that Tonio Borg has destroyed his own candidacy by his utterances and actions as a Minister. His actions on immigration  when he supported Berlusoni’s agreement with Gaddafi’s Libya to send back immigrants to Libya to be tortured is compounded by the 2002 Eritrean refugee mishap documented by Amnesty International amd UNHCR. Tonio Borg as Malta’s Minister for the Interior  was responsible for sending back Eritrean immigrants. Some were tortured others disappeared.

Tonio Borg’s utterances against tenancy rights of same sex couples during the rent reform debate in Malta’s Parliament may have been forgotten by Stephen Calleja.  Calleja may even consider as unimportant the fact that Tonio Borg defied the referendum result and opposed divorce legislation.

In view of Tonio Borg’s record as pointed out above I do not consider that his nomination was the appropriate one.

When Lawrence Gonzi, notwithstanding the above decided to proceed with Tonio Borg’s nomination he was gambling Malta’ reputation.  He should have nominated someone else. There are plenty of suitable candidates amongst Malta’s  404,000 population.

It is on Lawrence Gonzi’s doorstep that Stephen Calleja should direct his criticism. But obviously, as he is “independent” he will find considerable difficulty in doing so.